Shundra Brown is thrilled to continue as principal of Bailey Middle School. Over the last twelve years, she has worked tirelessly to build schools that inspire and equip all students to pursue futures beyond what they can imagine. Prior to coming to Spring, Shundra led campus transformation at the elementary, middle and high school levels. She has served as a Middle School Assistant Principal, High School House Principal, and Elementary Principal in the Dallas-Fort Worth Metroplex. She holds advanced degrees in Teaching and Educational Administration. Ms. Brown was born and raised in Houston--and she is delighted to come back home.

Dr. Brown has served as an Assistant Principal, Principal and Director in Texas, Colorado and Washington.  As a Principal, Dr. Brown’s central work focused on enhanced access, equity and rigor to ensure the success of a majority at-risk population of students.  His efforts led to the development and implementation of a blended model of learning where the use of online learning platforms were successfully integrated into the curriculum; resulting in greater access for at-risk students and a significant increase in their graduation rate.

In addition, Dr. Brown has been an adjunct faculty member at Lone Star College and North American University, where he taught developmental math courses and masters level educational leadership respectively.

Six years into his teaching career, Dr. Brown decided to take a break from education to serve his country in the military.  He served as an Attack Helicopter Pilot in the U. S. Marine Corps, and later worked as a Data Analyst and Subject Matter Expert for the Naval Strike Fighter Weapons School, Atlantic.  He has also worked as an Operations Manager for a large grocery distributor, and most recently for Amazon.

Dr. Brown received a Bachelor of Science degree in mathematics from Prairie View A&M University and a Master of Education Administration degree from Sam Houston State University.  He earned a Doctorate in Education from the University of Houston, specializing in educational leadership, where his research focused on building academic resilience in African American male student populations. 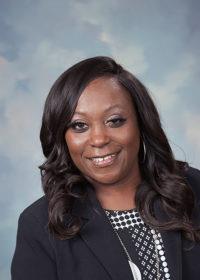 My name is Dr. Kimberley Booker and I am honored to be the 8th Grade Assistant Principal this school year. This is my 25th year in education and I have served in the role as teacher, lead teacher, literacy coach and literacy specialist. I have also served as district curriculum specialist, district RTI coordinator, assistant principal, and dean of instruction. When I am not working, I spend time volunteering as a school board vice-president and as the CEO of two nonprofit organizations for girls and boys.

I am all in with Bailey Middle School and my desire is for all students to succeed. 8th grade, this is our year to excel and be an exemplar for the entire district.

“The function of education is to teach one to think intensively and to think critically. Intelligence plus character-that is the goal of true education.” Dr. Martin Luther King, Jr.

I am Jy’Syria D. Selmon, and I am delighted to serve as your 7th Grade Assistant Principal this year.  I am a proud Mississippian turned Houstonian entering my 13th year in Education, nine of which have been right here at Bailey, so I believe it is safe to say that I am definitely “TEAM BAILEY”!  I have had the opportunity to serve in many roles as an educator including both a 6th and 8th grade ELAR teacher, teacher leader, testing coordinator, registrar, cheer coach, and student activities sponsor.  I received my Bachelor of Science degree in Elementary Education and my Master of Education degree in Curriculum and Instruction from the University of Southern Mississippi.  “Southern Miss to the Top!”  I moved to Texas in 2013 after having taught for three years in Hattiesburg, Mississippi, and I’ve been a proud Bailey Buccaneer ever since!

I am eager to work with each of you, and I am looking forward to an amazing year of growth and achievement at The Rickey C. Bailey School for Performing and Visual Arts.  In the words of our fearless leader, Principal Brown, we have to remember to “Pivot, not panic”, and when we feel as if we have nothing more to give, we must remember, “The show goes on.”  Go Bucs!

I am always available to each of you if needed.  Please do not hesitate to reach out to me.

Mrs. Cole is no stranger to Bailey Middle School! She is entering her second year as Assistant Principal, and she has over eight years of successful experience in curriculum assessment and development. She has been recognized consistently for performance excellence and contributions with proven success in leadership, operational excellence and organizational development, with a keen understanding of instructional deficits of at-risk learners. Most recently, Mrs. Cole spearheaded "The Concurrent Experience" and the Bailey "Summer Bridge Program". Both initiatives were very successful. We are excited to welcome Mrs. Cole to the Administrative Leadership Team!