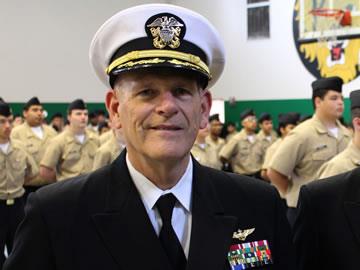 Q. Can you tell us a little about your service?

A. Well, I was in the Navy on active duty for 31 years, 27 as a commissioned officer. I was a pilot, and I’ve been pretty much all over the world; the only sea that I haven’t been in is the Black Sea. I also helped in teaching new pilots how to fly – I did practical instruction and I also did classroom instruction.

Q. So, you must have had several deployments?

A. I made a few longer deployments. I also made quite a few short deployments. Early on, I was a maintenance test pilot, and no aircraft or detachment could go out without having somebody that could check the planes after they’d been taken apart or worked on. I was often on task for those kinds of things. So whether it was for a week, or for months at a time, I got to be at sea quite a bit, had a bunch of exciting times.

Q. Were you working on aircraft carriers?

A. Although I’ve been on carriers, I was more often on frigates, destroyers, cruisers, even battleships. I pretty much flew off of all of them. There was one point in my career where every ship on the west coast that had a flight deck, I had physically landed on that ship or been on that ship.

Q. How do you think your time serving in the military affected your own personal growth or impacted your outlook on life?

A. I’m going to say that I think it allowed me to expand my horizons. I think military service in general, and especially when you deploy or go overseas and work with other folks in other countries, it has that tendency to expand your horizons. The experiences that I had and the things I got to see had a very big impact on me. I believe – after having traveled all over the world – that we are extremely fortunate to live in America and to be American. There is no place else like America on the face of the earth.

Q. What are some of the lessons, learned during your time in the service, that you still think of regularly in civilian life?

A. I believe that most people learn by doing, that the vast majority of the folks when they do something, then they understand it. So whenever we’re trying new things – like with our NJROTC cadets – you have to expect that you’re going to stumble and fall a bit until you do something or until you’re shown how to do it. It’s not going to take until you do it. So learning by doing is kind of one of my key things.

I also think things just don’t happen unless you have a plan. And when you come up with a plan, you shouldn’t change the plan willy-nilly. Trying to change things on the fly is normally not a good thing.

Q. Do you have any favorite ways to commemorate Veterans Day each year? Any special traditions that you’d like to share about that?

A. Around Veterans Day, we stay busy putting on programs with the regiment, or we’re out supporting community events. At this particular moment in time, Veterans Day, to me, means work. But I do try, at some point, just to kind of pause and think back on all the folks that I’ve served with and known through the years, and to reflect on some of the things that have happened to them. So that also adds some perspective as to how fortunate we are.

Q. Do you still fly much?