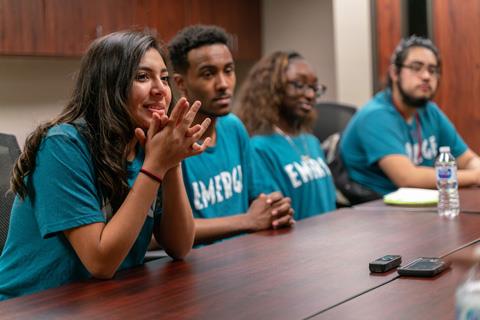 Spring ISD EMERGE Fellows Diana Salmeron, from left, Richard Knox, Madeleine Diagne and Kevin Bonilla discuss how the EMERGE program has offered them a supportive community to help them reach their goals.

When Westfield High School junior C’Kendall Carey first learned about EMERGE during an info session at her school, she wasn’t expecting to hear anything new, just more general information about how important college was and how she should work hard and stay in school. As a high-achieving student from a minority background, Carey already knew how important education was for her. What she needed wasn’t another pep rally. What she needed was help getting from where she was to where she knew she wanted to be.

So, when EMERGE Program Coordinator Sherese Woolard started talking about free SAT prep classes, out-of-state college tours and the chance for Carey and students like her to join a group dedicated to helping them succeed, Carey started paying attention. Afterwards, intrigued, she began doing her homework on the group.

“I’m the kind of person that likes to do a lot of digging,” Carey said. “So I did a lot of research before I applied, and I was like, ‘These people seem to know what they’re talking about.’ I looked for success stories, and I liked what I saw. I liked the mission. They were checking a lot of boxes for me, so I applied.”

That was a year ago. Now Carey is one of 25 juniors who form EMERGE’s first full cohort of Spring ISD students. After launching in Houston ISD and later expanding to Spring Branch ISD, the EMERGE Fellowship now operates independently as a Houston-based non-profit, working in more than 50 high schools across the region. There are more than 1,000 current EMERGE Fellows – the group’s term for its high school participants – as well as about 900 EMERGE Scholars, former fellows who are now enrolled in colleges across the country.

Together, they form a network that’s empowering Carey and other EMERGE students to set their sights on some of the nation’s most selective colleges and universities. For students from underserved communities already pushing themselves to do their best, what EMERGE offers can be a welcome relief amid the stresses and challenges of high school life.

“School can get so competitive, and home can have so many pressures, too,” Carey said. “Sometimes you get negativity at home and at school. And the negativity doesn’t always come from a bad place – sometimes it comes from a place of love. But it’s not the message you need to hear all the time, because it doesn’t help you succeed. And I feel like EMERGE gives you that nice little point in the middle, where it’s not home, it’s not school, it’s somewhere where you can be you.”

When Carey and several of her fellow EMERGE classmates sat down to reflect on joining the program and how it had helped them so far, they each emphasized the importance of surrounding themselves with like-minded people who would support them in achieving their goals. According to Wunsche High School junior Jocelyn Gonzalez, many program participants – roughly 90 percent of whom would be the first in their family to attend and graduate from college – draw strength from forging their new pathways together.

“Both of my parents are immigrants,” Gonzalez said. “Neither of them went to college. Both of them dropped out of high school in Mexico. And I didn’t really have anyone to give me the information that I needed to apply to college.”

Like many EMERGE students, she also didn’t know that there were elite U.S. colleges with the resources to meet 100 percent of a student’s demonstrated financial need. For Gonzalez, it was a revelation that schools like this were not only on the lookout for students just like her, but might even be cheaper for her to attend than a local community college or nearby university.

“I would look at all these selective schools and I’d think, ‘Wow, I’m never going there because I can’t afford it,’” Gonzalez said. “But EMERGE has opened up new pathways that have also allowed me to gain more opportunities and more insight on how I can build a better future for myself and for my family.”

In addition to guiding students through applications and the financial aid process, EMERGE also helps them figure out what they really want in a college. For students who grew up taking diversity for granted at home, that might mean asking how comfortable they would feel spending four years on the campus of a largely white Ivy League school. For others, whose initial idea of a “dream” college might be limited to one or two big-name schools like Harvard or Yale, the process can involve carefully evaluating their own core beliefs.

“A lot of things that I thought I knew I wanted, I’m questioning them now,” said Spring High School junior Diana Salmeron, who for years had dreamed of going to Harvard. “But that’s okay, because I know I’m going to figure it out. That’s what EMERGE does. It helps you pinpoint your values, your strengths, your passions, what you actually like.”

In the process, many EMERGE Fellows have made unexpected discoveries about both themselves and the college admissions process, unearthing inner resources they didn’t know they had. Richard Knox, an EMERGE Fellow from Westfield High School with a passion for music, talked about his mom, who has always supported him, but who worries about him graduating and moving too far away from home.

“I think she worries about me a little bit too much,” Knox said. “When it came to applying for EMERGE, I did it on my own. And I guess it taught me a little bit of independence, and that I don’t always have to rely on my mom. When I want something, I can go after it and get it.”

Others have discovered new talents – like public speaking – or stumbled onto new insights about how they might serve the world with their gifts.

“So far, one of the biggest takeaways for me personally has been the importance of extracurricular activities,” said Kevin Bonilla of Spring Early College Academy. “I never thought of it much, you know? I have good grades. I’ve always done really well on tests. And it never crossed my mind that I would have to, you know, be involved, not just do good in school. Because college isn’t just doing good in school. It’s giving to your community, it’s being involved. I think that’s one of the biggest things that I want to share.”

When the drama of the high school social scene gets overwhelming, or when peer pressure from friends and classmates makes hitting the books tough, many of the students said that their fellow EMERGE cohort members help them to stay focused and on track.

Diagne is highly motivated to be successful and, given the competitive nature of college admissions, she still struggles sometimes with opening up and sharing with others about what drives and motivates her. But, encouraged by her mother – who came to the U.S. from Senegal to raise her family – Diagne is learning to connect with fellow scholars whose aspirations are as high as hers.