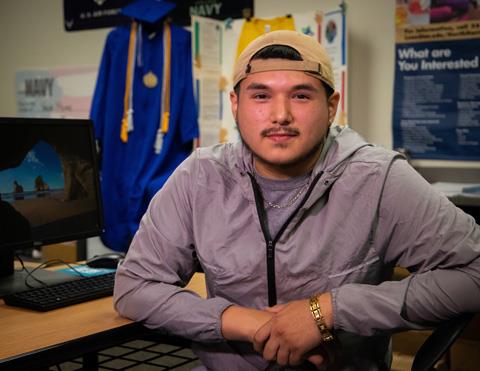 Dekaney High School Senior Eric Garcia will join a group of Houston-area graduates headed to the University of Virginia this fall as Posse Scholars.

HOUSTON - May 24, 2019 - A year ago, if you had told Dekaney High School senior Eric Garcia that he would be leaving home after graduation to attend college more than 1,200 miles away in Charlottesville, Virginia, he probably would have told you – in his signature low-key, polite, and calm manner – that you were crazy.

But Garcia – one of the first Spring ISD students chosen to join the EMERGE Fellowship at the end of his junior year – was in for a few senior-year surprises, not least of which was that, when opportunity comes around, sometimes you have to change time zones to answer the call. Earlier this spring, after a months-long application and interview process, Garcia learned that he had been selected as a 2019 Posse Scholar, and that he would be receiving a four-year, full-tuition scholarship to the University of Virginia through the school’s partnership with the Posse Foundation.

“I remember that night I was sitting with my girlfriend on the couch, watching a movie,” Garcia said, “and they called me, and they were all just screaming on the phone, telling me, ‘Welcome to UVA! You’re going to be a Cavalier!’ I didn’t know what to say, I was just in shock. At first, I was like, ‘Are you for real?’ And then they said, ‘Yeah, do you not want it?’ And I was like, ‘Of course I want it!’”

Offering a comprehensive college access and leadership-development program, Posse supports students from the spring semester of their senior year in high school through college graduation and into their professional lives. The program identifies public high school students with high potential who might run the risk of being overlooked by standard college recruiting efforts. In addition to receiving full-tuition scholarships to some of the country’s top schools, Posse Scholars are placed in groups of 10 – their very own “posse” – to support each other and encourage one another’s growth through college and beyond.

Garcia – one of just 61 area students chosen from approximately 1,200 nominees this year – was nervous before first meeting with his own posse – nine other Houston-area students who will all attend UVA together starting in the fall – but quickly warmed up to the group.

“I guess they do what they do for a reason,” Garcia said, “because I found something to connect with in each one of the members of my posse.”

Garcia credited his EMERGE program coordinator, Sherese Woolard, who encouraged him to keep an open mind when looking at colleges. When he first found out he had been nominated for the Posse Scholarship, Garcia admitted that Texas A&M was the partner school that caught his eye. But, given his strong interest in studying business, the Posse Foundation decided that Garcia would be a perfect fit for the group headed to UVA, which boasts one of the top-ranked undergraduate business programs in the country.

“Posse is just a great way to get students to start thinking outside the box,” said Dekaney High School College and Career Counselor Melanie Bailey, who helped sponsor Garcia’s Posse nomination. She added that Garcia’s decision to leave Houston for college took courage and showed a willingness to grow.

“With Eric, so much of his personality has come out through the whole process,” she said. “And because of his tenacity, his integrity, his commitment to following his dreams, that’s what helped him stand out.”

Garcia’s Posse Scholarship makes him one of three Spring ISD seniors joining the program this year (the other two students are both headed to Texas A&M in a STEM-focused posse. But Garcia has the distinction of being the first student ever from Dekaney to be accepted into the competitive scholarship program.

According to Bailey, Garcia’s leadership talents are already showing through. During his senior year, as he continued to learn more about the college application process through his work with EMERGE and through his Posse Scholar interviews, Garcia passed on that knowledge, sharing it with fellow students.

“He absorbed all that, and was able to use that to help others,” Bailey said. “He sees that potential in others and tries to help bring that out in them. To me, that’s the sign of a leader.”

For Garcia, the journey is just getting started. He’s been meeting weekly with his Posse group, learning more about UVA and what life there will be like, contemplating his upcoming move, and refining his vision for the future together with the other member of his group.

“Every Wednesday since February I’ve been meeting with them,” Garcia said. “It’s basically meetings to grow with one another, and to make sure they send us off knowing that we’re a posse, and that we’re not just going to fall off and get to UVA and forget about each other.”

Garcia thinks that’s unlikely, given his early impressions and the bonds already forming among the Posse students.

“I feel like, where we’re at right now – me attending UVA – I know that I have people to lean on,” Garcia said, “basically just what ‘posse’ means – that we’re going to go as a group, and we’re all going to push one another. And that’s what they teach us, to push one another, to help one another out.”

Then, in his own understated way, Garcia summed it up perfectly.