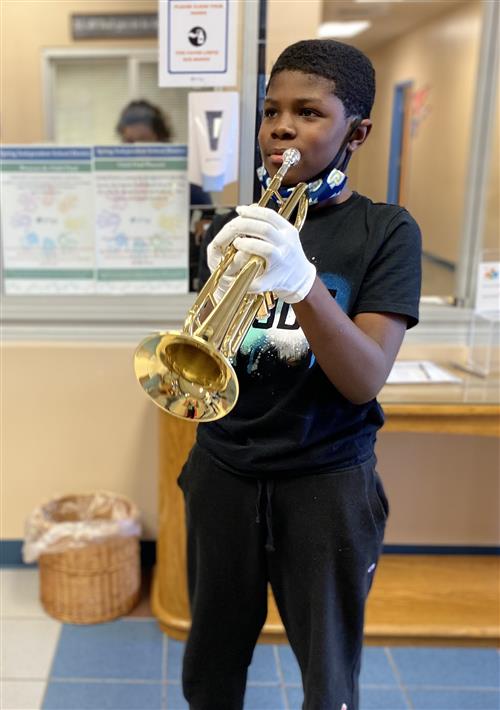 HOUSTON – Jan. 25, 2021 – When Spring ISD fifth grader Jaron Collins isn’t in virtual class, he loves to spend time in his room with toys pretending to play the trumpet in a marching band.

His music teacher, Charlotte Hatley at Ponderosa Elementary School, quickly took notice – and so did an anonymous district employee, who purchased a brand-new trumpet to surprise Jaron with last Tuesday after a video of him playing a pretend trumpet surfaced on social media.

“His mom told us, ‘He is always upstairs doing stuff like this in his room!’” said Hatley. “You can see from the video and also when we’re on Google Meet for music class that he’s always in his bedroom practicing.”

“He sent in a video of the jazz music in the background where he’s obviously choreographed his own routine,” said Swearingen. “There’s nothing we love more than to be able to foster and encourage our students when there’s that passion there.”

Last week, Jaron was surprised with his gift while visiting the Ponderosa campus along with his mother, Mona Collins. Jaron opened the box and immediately placed the instrument gloves on his hands, put together the trumpet, and began marching on beat across the school’s reception area.

“It feels great,” Jaron said, mentioning that his love for the instrument began at a very young age after his family took him to his first Historically Black College and University football band competition at the Bayou Classic at Southern University. “It’s where I want to go to college and be in the band,” he said.

His mother says she took notice of Jaron’s passion for music a few years ago. “The first time I noticed he was into the trumpet was about third grade,” said Mona Collins. “Ever since, he’s been into it.”

In addition to receiving a new trumpet, Swearingen says Jaron will be able to pursue his interest in the trumpet through the district’s Performing and Visual Arts program.

“You’re getting an early start and what a great way to set your goals,” Swearingen told Collins. “You can do it and I have no doubt you’ll be there. The first game you play, all you have to do is call and I’ll be there for you.”