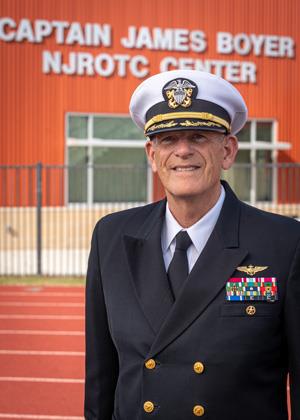 HOUSTON – Jan. 29, 2021 - A stream of current and former students, military colleagues, district staff and administrators, friends and family members came by the flagpole at the recently completed Captain James Boyer NJROTC Center at Spring High School on Wednesday. They came to wish ‘fair winds and following seas’ to the center’s namesake, retired U.S. Navy Capt. James Boyer, who is retiring once again after two decades spent leading the school’s Navy JROTC program and working with thousands of district students.

“Captain Boyer is the epitome of excellence when it comes to JROTC,” said Spring High School Principal Diaka Melendez, who praised Boyer’s behind-the-scenes work helping students plan for their futures and obtain scholarships to help them reach their goals. “He’s opened so many doors for our kids, and he really, really cares about them. They’re big shoes to fill.”

The reception brought out old colleagues as well as current and former students and their parents to thank Boyer and wish him well. The long-term impact of the school’s Navy JROTC program could be seen in the presence of alumni from early years, including the “plank owners” – students who joined in 2001 when Boyer first arrived to lead the new unit.

Preston Goodwin, a 2005 Spring High School graduate, was among those plank owners, and he and a group of fellow alumni came out to congratulate Boyer and present him with a commemorative bell – engraved with details of Boyer’s service to the school and the community – and to thank him for his influence on their own lives.

The reception also brought out recent alumni, including Emily Brower, a 2019 graduate and former cadet leader who spent four years as a member of the school’s Navy JROTC Lion Regiment.

“When they came to my middle school to recruit people for JROTC, that really caught my attention,” Brower said, “and then once I met the instructors and saw that they were really about bringing the best out of a person, that really motivated me to stay.”

Now studying psychology at Sam Houston State University, Brower said she regularly utilizes elements of her training and the lessons she learned as a member of the program.

“Everything we learn, like discipline, all that kind of stuff, it really applies outside of the program as well,” Brower said. “It really helps you whether you’re getting a job outside of the service or in the service. It helps you get ahead, it helps you with real-life stuff, so pretty much you can take everything you learn from this program and apply it to real life.”

A Navy helicopter pilot and graduate of the U.S. Naval Academy, Boyer served on active duty for 31 years, including 27 as a commissioned officer. In 1994, he joined the faculty of the Armed Forces Staff College and later became a professor of naval science at Rice University and Prairie View A&M University.

As commanding officer of the Naval ROTC Houston Consortium from 1997 through 2001, Boyer was already involved in work with area high school students, but he discovered a passion for teaching young people that inspired him to take on the JROTC instructor mantle full time after retiring from active duty in 2001.

“I’ve tried to work to help folks, and I believe that education is the primary key,” said Boyer, who in his ROTC role saw many younger students struggling to develop the skills and habits needed to achieve their potential. “So I kind of looked at that and said, ‘Okay, I could help that person. I could make a change that makes their lives easier or better, so I want to pass on that knowledge.’ And that kind of drove me, to some extent, into this program.”

The program at Spring High School has grown into the largest Navy JROTC unit in Texas and one of the largest in the country, regularly earning high honors in annual inspections and competitions. In March 2019, Boyer joined a select group of district namesakes when the Spring ISD Board of Trustees voted unanimously to name the Navy JROTC program’s planned new facility after him – a rare honor for a current district employee.

“We have become the crown jewel of these programs,” said Trustee Dr. Deborah Jensen at the time, remarking on the unit’s continued high enrollment, awards and distinctions, and the tens of millions of dollars in scholarships earned by students in the program over the years. “I think we couldn’t have a better tribute than to name this facility after Captain Boyer,” she said.

Now, preparing for his second retirement, Boyer said he was happy that future generations of students would be able to study and train in the new facility. Alumni attending the reception were also excited about the new center, but said that, no matter the setting, it was the fierce loyalty and dedication shown by Boyer and his team of instructors that stood out most from their time in the program.

“Captain is the type of person to never give up on someone,” Brower said, “even if they’ve messed up or didn’t really follow his advice, and he truly cares about every single person. He’s truly the definition of caring, compassionate – all of those good things. And he takes care of his people.”