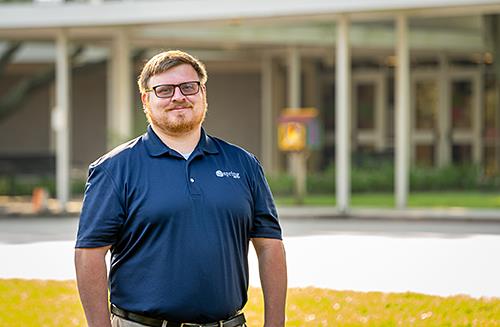 Only in his first year teaching in Spring ISD, Martinez says his passion for teaching SPED came at a very early age.

“Education has been my passion for a long time, but what really pushed me towards special education was not only seeing my brother, but in high school, where I saw the students who were a little different than me and how they didn’t have a voice being bullied,” said Martinez. “I decided around 9th or 10th grade that I wanted to be that voice that they might not be able to have for themselves.”

Reflecting on his first year with the district, Martinez says his experience so far has been amazing, and mentions he has never worked with people who have supported him as much as the staff at Reynolds.

“I was the new guy in the school and the district, and they took behavior and curriculum tips I had and ran with it,” said Martinez. “They really opened their arms to me. I told my principal, ‘This isn’t an award for me, but an award for the campus’ because they’ve really supported everything I’ve asked of them.”

Reynolds principal Dr. Angeles Perez says Martinez is one of the most passionate teachers she has come across in her career, and he shows up to work with a smile every day while giving 200 percent to his role.

“He has been a joy and a true asset to our team,” said Perez. “He goes out of his way to help anyone and everyone. As it relates to his job performance, he has left our staff, parents and district personnel flabbergasted in what he has been able to accomplish with our scholars in such a short time.”

Perez says that Martinez’s keen sense of awareness allows him to reach even some of her campus’ most challenging students.

“He is a joy to watch and his positivity is infectious,” said Perez. “I could not be prouder of him. I am grateful he chose to be a Reynolds Armadillo!”

Although most of the world has remained virtual over the last five months, Martinez says he was “over the moon” discovering he was recipient for the 2020 Teacher of the Year award.

“Words can’t even describe it,” he says. “I wasn't expecting it–especially being a first-year teacher in the district and in special education. People in special education normally don’t get this recognition, so I’d like to think that I made my impact.”

A total of 40 Regional Teachers of the Year are considered for Texas Teacher of the Year in a selection process facilitated by the Texas Association of School Administrators (TASA). According to the site, judges meet every year in August to select six finalists—three elementary and three secondary—based on the information provided in their application for Texas Teacher of the Year. Finalists are interviewed sometime in September or October for the opportunity to become the Texas Elementary and Texas Secondary Teachers of the Year. 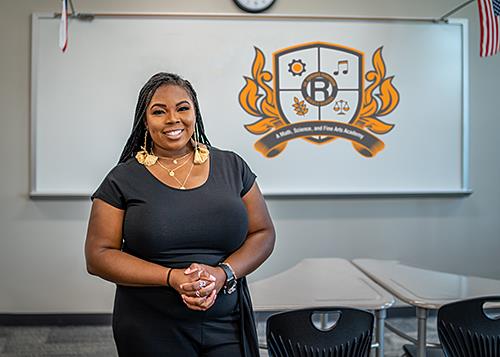 Powers, who is entering her third year teaching at Roberson Middle, says she credits the classic book, Thank You Mr. Falker by Patricia Polacco, as her inspiration into teaching. The story focuses on the author as a child with special needs and her teacher, who would not let his student fail.

“This story lit a path for me and upon hearing it, God's purpose for me was confirmed: I am called to teach, to inspire, and to lead,” said Powers. “Along with the book, I was fortunate to directly experience numerous teachers who cared and truly imprinted my idea of the ultimate educator in my heart.”

Roberson principal Tracey Walker says she knew from the first day that Powers would be a true gem for Roberson and Spring ISD.

“As a leader, she inspires me and others daily to keep pushing and striving for excellence,” said Walker. “She motivates us all to reach beyond the status quo in order to imagine the unimaginable for scholars.”

Walker also says Powers is the definition of “teaching like a champion.”

“It is utter joy to see students' faces light up at the thought of learning what and how they will learn each day,” said Walker. “Ms. Powers doesn’t hold math class with students: she gives [them] an experience beyond life.”

When asked about receiving Secondary Teacher of the Year for 2020, she says she feels “honored, humbled, accomplished and motivated.”

“Being a teacher echoes my very well being,” said Powers. “It is my mission to leave a legacy of life long learners and be a trailblazer among my peers. My calling is to plant and nurture seeds that will take root and grow to inevitably shape tomorrow.”

“Due to unprecedented times, they did not get the opportunity to be honored at our Employee Recognition Banquet this year, but I know that will not slow them down,” said Watson. “They are the personification of one of our major core values, and that is to do what’s best for our students.”

To learn more information about the Texas Teacher of the Year program, visit the TASA website.