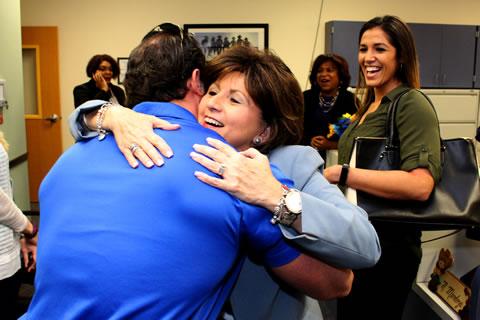 Cooper Elementary School Principal Leticia Gonzalez is greeted with hugs and cheers from family and personnel after learning she has been named Spring ISD Elementary Principal of the Year.

Several family members, friends and campus staff were also on site at the two campuses as the selections were revealed. The surprise announcement was broadcast over each school’s intercom system to all students and personnel by Dr. Lupita Hinojosa, chief of school leadership and student support services.

“We are very proud of our district leaders who go above and beyond what is called from them to teach and prepare our students. Mrs. Gonzalez and Mr. Villota have demonstrated just that through their hard work and relentless dedication to our students,” said Hinojosa. “The students are having success because of them and their teams; it has been a total team effort. For us, it is based on the student performance data, and that their peers recognize their leadership and support of others. The district is so very proud to have them!”

The annual award is given to a primary and secondary level principal. The finalists were selected using campus observations, data points and votes from other campus leaders. The principals were also judged on their commitment to the district’s priorities and their school’s community engagement.

At Cooper Elementary, Gonzalez has worked to increase campus pride, community involvement and academic success. She strives to prepare her teachers to teach and to do so with passion. She believes in the philosophy of putting kids first because she wants success for every student, every day, in a safe learning environment. Gonzalez has worked in education 34 years, 12 of those at Cooper Elementary.

“It’s an honor to be recognized by your peers but I couldn’t do it without my team. They are wonderful! They are a fine-tuned, well-oiled machine, and they know what I expect. I have those high expectations for myself and my staff,” said Gonzalez. “I want all of my teachers and students to experience success, and we will celebrate that success together.”

Under Villota’s leadership, Twin Creeks has worked with campus teachers and leaders to establish schoolwide curriculum standards to ensure student success. He is constantly visible across the school and is always available to his students and team. He engages everyone he works with and greets all his students with a smile in order to generate a culture of pride and team building. Villota has worked in education 17 years, two of those at Twin Creeks Middle School.

“I love what I do. I have a fantastic team! My staff and students are what make every day meaningful and enjoyable. That’s what makes it great to work here. I also have a great family that I dearly love and supports me. !Los amo!,” said Villota. “I do this with a passion to help kids, and their success is everyone’s success.”

Gonzalez and Villota advance to the Region 4 competition, and will also be recognized at the annual Spring ISD Employee Recognition Banquet to be held later this year.