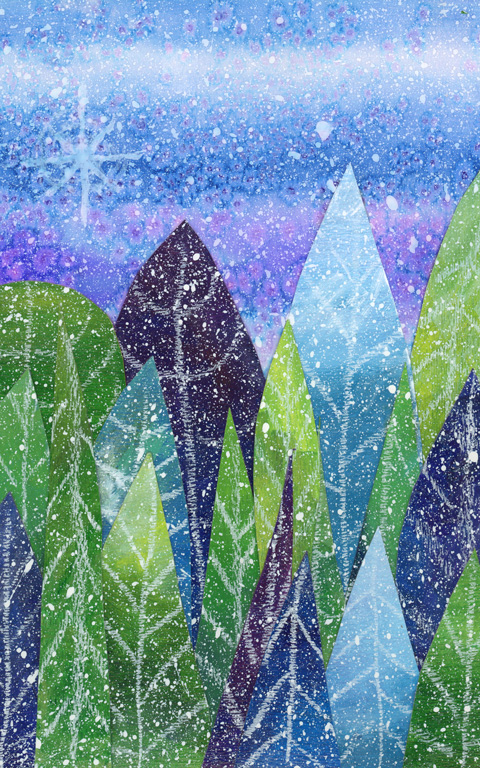 HOUSTON - Dec. 11, 2019 - With the final votes all tallied in the annual Superintendent’s Holiday Card Contest, Marshall Elementary School fifth-grader Joshua Castro took top honors this year for his original piece, “First Snow.” Castro’s colorful winter-themed artwork was selected during the final round of judging from some 50 semi-finalists from across the district.

“There are over 15,000 elementary scholars who take elementary art in our district,” said Assistant Director of Performing and Visual Arts David Landgrebe during Tuesday night’s board meeting, where the top three winners were honored. “Each elementary school had the opportunity to select what they felt was their best artwork for the contest.”

This year’s contest was open to all Spring ISD elementary students, with campuses hosting their own holiday card competition before each school submitted a pair of semi-finalists for the districtwide competition. The top three winners for 2019, listed together with their campus and art teacher, are as follows:

Castro said he had long enjoyed the calm, peaceful feeling he gets from drawing, but for the card contest he decided to use some new techniques he’d been learning in school, including watercolors, cut paper and acrylics, along with technical layout skills he learned from Marshall Elementary School’s art teacher, Patricia Ballast.

“It was kind of hard, because it was my first time, like, painting and actually going in a contest,” Castro said. “So when I did it, I was nervous if it was going to be good enough.”

He was excited to learn that his piece had been selected, and he also offered some words of wisdom on the benefits of developing new skills as a way to grow and be more creative.

“I didn’t know I could paint,” Castro said, “and I didn’t really like painting at first, but when I found out I’m good at it, I started liking it.”

During Tuesday’s board meeting, each student was presented with a bag filled with art supplies as well as a poster-size print of their artwork, which will also be displayed at the district’s collaborative arts performance, The Greatest Winter Show, on Dec. 16. During that event, Castro, Watson and Pachon will be joined by the other top-10 finalists to be recognized.

The district’s holiday card is sent out each year from Superintendent Dr. Rodney E. Watson to community leaders, business partners, senior administrators and others whose efforts support the district and area students.

Joshua’s mother, Luz Castro said she was amazed to watch her son’s growth as an artist this year, and was thrilled when he won the contest. But she said the biggest holiday blessing for her had been seeing him gain new confidence as he enjoyed his success and the recognition of his peers.

“He’s had a tough couple of years,” she said, standing proudly beside her son before Tuesday night’s board presentation, “but this changed everything. I told him, ‘Mijo, that’s what God does. He turns everything around.’”