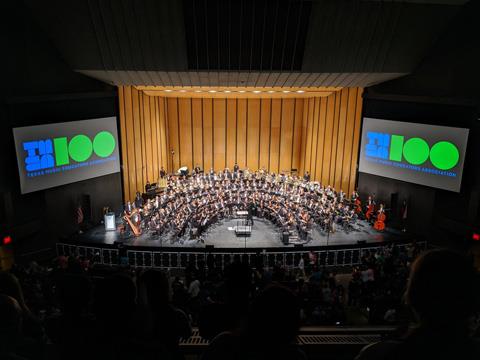 Edquist, Fernando, Hernandez and Cruz each began the All-State audition process as just one of more than 70,000 high school students across the state vying for a coveted spot in just 15 ensembles (including bands, orchestras, and choirs). The competitive audition process involves judging and elimination rounds at the District, Region, and Area levels. With only the top 2.5% of musicians ultimately making it into the ensembles, All-State is the highest individual honor a Texas music student can receive.

All four students knew going in just how tough the competition could be, not least because they had all been through the process before – and been selected. According to Assistant Director of Performing and Visual Arts David Landgrebe, it is an accomplishment that requires an ongoing commitment to craft, artistry and hard work.

“It's very difficult to make it once and even more difficult to qualify in two consecutive years,” Landgrebe said. “We are so proud of these musicians!”

In addition to being a high honor, All-State is also an enrichment opportunity for students taking part. Participants spend three days rehearsing with their respective ensembles under the direction of nationally recognized conductors. The resulting performances are the culmination of each year’s TMEA convention.

This year’s clinic and convention marked a special occasion, coinciding with TMEA’s centennial celebration. Originally dubbed the Texas Bandmasters Association, the group was founded in 1920 to help organize and oversee municipal band competitions. The organization has spent the past century serving Texas music teachers and students, building a legacy that, according to Spring ISD Director of Performing and Visual Arts Dr. Joe Clark, puts All-State musicians in a class apart.

“These student musicians are truly the best of the best in the state of Texas,” Clark said after returning from this year’s convention. “We are incredibly proud of all their outstanding work. Congratulations to the students, their directors, and their campus programs!”