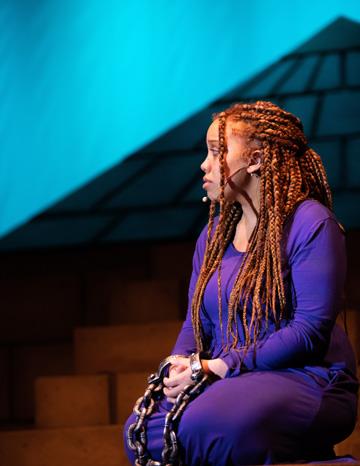 HOUSTON - April 23, 2020 - Each spring, the annual Tommy Tune Awards celebrate the creativity of Houston-area high school theater programs and the dedicated students who take part in them. When this year’s awards ceremony is livestreamed online at 7:30 p.m. on Tuesday, April 28, one group watching expectantly from home will be the members of Spring High School’s Lion Players Theatre Company, which received 10 nominations – including Best Musical – for its production of “Aida.”

“They were so excited,” said Spring High School Director of Theatre Marilyn Ocker, who like her students watched the Best Musical nomination announcements live on Facebook last month. “I probably got about 30 text messages that said, ‘We did it!’ They were just beside themselves.”

This year’s special ceremony is set to feature video highlights from area high school musicals, at-home student performances, and award presentations from Broadway actors. The broadcast will be available on the Tommy Tune Awards and Theatre Under The Stars (TUTS) Facebook pages, as well as the official TUTS YouTube page. For more information, or to set a reminder for the live event, visit the Facebook event post.

The Lion Players’ 2020 Tommy Tune Award nominations cover a range of both technical and performance areas, including nominations in the following categories:

In addition to senior Makaila Heath, nominated for the second time in two years for the Leading Actress award for her portrayal of Aida, the production garnered two nominations in the Supporting Actor category, for junior Christopher Aviles and sophomore Jordyn Wardsworth. The show also received a nomination for the work of its talented ensemble of student actors, singers and dancers. According to Ocker, the across-the-board strength of the student performers was key to earning the coveted Best Musical nod.

“That was one of our goals, to have as strong a show as possible so that we could be nominated for Best Musical,” Ocker said, “and we wanted the ensemble members to feel like they were what put us over the edge to earn that Best Musical nomination. Our lead actors were amazing, but those ensemble roles are so important.”

The annual ceremony typically offers a high-energy "Tony-style" theatrical event held at The Hobby Center for the Performing Arts in Houston’s downtown theater district. With this year’s ceremony being held online, Ocker said that at-home audiences have a special chance to share in the excitement.

“This is a great opportunity for people in the community to be able to log in and see what Tommy Tunes is all about, and be exposed to some of the amazing theater that they do around the city of Houston,” she said. “Our kids are amazing. There is magic in the theater, and the theater is magic.”

“Aida” was one of 46 eligible productions evaluated for this year’s awards, and one of only eight to receive the Best Musical nomination. More information about this year’s nominees can be found on the TUTS website.