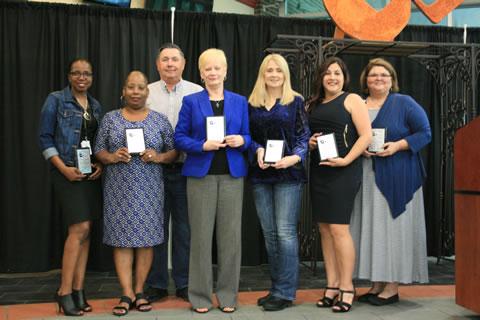 HOUSTON - March 10, 2017 - A number of former students and staff came home to Carl Wunsche Sr. High School on March 8 to celebrate the career academy’s 10th anniversary. They were joined by members of the Spring ISD Board of Trustees, Superintendent Dr. Rodney Watson, campus administrators, staff, parents and business partners in praising the school’s culture, support for students, and national influence on education.

Sheila Redmon-Jones, a parent whose children have all attended Wunsche, described a culture at the school that teaches students how to bounce back, work hard and dream big. “It is the culture that allows them to adjust, adapt and most importantly, bounce back as they go through life,” said Redmond-Jones.

“Coming to Wunsche gave me a broader experience,” said Rahman. “Wunsche is a place for people to find themselves. I was excited. I wanted to come to school.”

Kenya Reeves, ExxonMobil employee and member of the Spring ISD Career and Technology Education Advisory Board, represented business partners that play an important role in the success of the academy. She talked about the school’s focus on building relationships, and said she has been impressed by how quickly the school has responded to her recommendations. “Bravo to instructors, administrators and dedicated staff,” Reeves said.

Although he did not become principal until later, current Principal Bob Thompson was involved in the designing and visioning process for the academy while serving as the school district’s executive director of secondary education. He said Wunsche still hosts teams of visiting educators from outside the state who come to see how Wunsche prepares students for college and careers.

A key component of that preparation is the capstone project that every senior must complete in order to graduate. Debi Koch, who was the first principal at the academy, was honored for her “tireless leadership in establishing a culture of rigor and excellence for the students and staff” when it was announced, at the end of the program, that the Most Outstanding Capstone Presentation would be renamed the Debi Koch Scholarship.

Following the program, guests were invited to view a showcase of student exhibits and enjoy refreshments prepared by the academy’s culinary arts students.

For more information, go to www.springisd.org/wunsche.