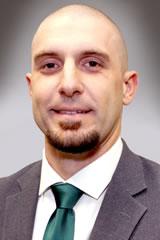 HOUSTON - March 28, 2017 - Trent Miller has been named head football coach and campus athletic coordinator at Spring High School. No stranger to Spring, Miller has served with the Lion football program since 2013 as the team’s offensive coordinator and quarterbacks coach.

While Miller has been part of the coaching leadership team, the program has racked up a host of accomplishments including securing the most successful three-year record in school history (30-9). In 2015, the team broke a school record with an 11-win season, the most wins in a single season in the school’s history and secured the school’s first ever district championship. In 2014, the Lions competed in the state quarterfinals, knocking out two of the state’s top 5 ranked teams along the way. The Spring High Lions ended their 2016 season as 16-6A Bi-District Champions and area finalist.

Despite the lengthy list of accolades, Miller believes that football is about more than winning championships.

“Championships are great, but it is my goal to ensure that all of our students graduate, get a quality education, and leave our campus as better people than they were when they got here,” said Miller.

Miller earned a bachelor's degree in kinesiology from Texas A&M University- Commerce. He began his coaching career in 2009 at Klein Forest High School.