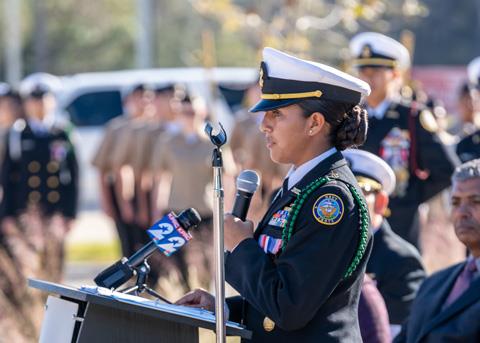 “It’s a pretty significant event for them,” said retired U.S. Navy Capt. James Boyer, who serves as the unit’s lead instructor. “All the cadets that will be returning will be issued a Distinguished Unit ribbon. They get to wear it because they were in the unit when they earned it, and it’s one of the top ribbons in the JROTC realm.”

The Distinguished Unit award criteria encompasses a wide range of factors, including cadet involvement rates, participation in drill meets and other JROTC activities, community service and outreach, along with ratings from annual unit inspections and success in achieving long-term goals set by the unit’s student leaders and cadets. The award also emphasizes academics, taking into account the number of students on honor roll, SAT and ACT participation rates, post-graduation plans, and scholarships earned by members of the unit.

“It’s not just the inspection, although the inspection plays a minor part in it,” Boyer said. “It’s based on everything that you’ve done all year long.”

Boyer said that earning the Distinguished Unit award is, in large part, a student-driven effort. Each year, cadet leaders meet with JROTC instructors to set annual goals, typically one of which is to finish the year with a distinguished unit rating.

“Our students – our cadets – make those goals, and that has been one of those driving things. They want to be a distinguished unit,” Boyer said. “Every one of them had a part in this. If they weren’t all working, this couldn’t happen. So, there’s a sense of accomplishment for them.”

Each Navy JROTC Distinguished Unit also receives a special pennant from the Navy for display. Boyer said the school’s Lion Regiment looks forward to hanging this year’s pennant in the new Navy JROTC building currently under construction on the Spring High School campus. The building, which along with the new Spring High School ninth-grade center is part of the district’s 2016 Bond, will include improved cadet facilities as well as entirely new features – such as a dedicated rifle range – that will allow for more advanced training and open up further avenues for student scholarships.

The Distinguished Unit designation also allows the school’s JROTC program to nominate cadets for admission to U.S. service academies, including the U.S. Naval Academy. According to Boyer, that added boost has helped a number of Spring ISD graduates go on to attend service academies after graduation.

Despite the ongoing campus closures due to COVID-19, Boyer and his fellow Navy JROTC instructors have been in regular contact with students, helping them finish the year strong, and working with upperclassmen on their post-graduation and college plans, including finalizing ROTC scholarships.

In the midst of a challenging time, Boyer said the Distinguished Unit award was a boost for student morale and a well-earned reward for students’ ongoing hard work and dedication.

“This is a culmination of all the things that they’ve done and participated in,” Boyer said. “It’s a great way to end a very strange year.”