HOUSTON – Feb. 6, 2019 – It was a celebration of both athletic skill and academic achievement on Wednesday, when senior athletes at Westfield, Dekaney and Spring high schools took part in National Signing Day.

At the event, held annually in February, students across the country sign letters of intent to attend universities of their choice and participate in collegiate athletic programs there. Altogether, 29 students took center stage during public ceremonies at their schools, joined by family, friends, teammates, campus and district administrators, as well as members of the Board of Trustees. 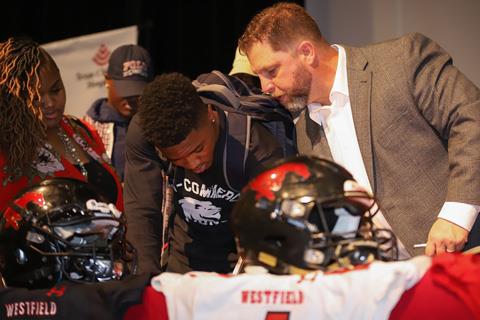 Coach Matt Meekins goes over some paperwork with Westfield Mustang Rayshawn James as he prepares to become a Texas A&M - Commerce Lion.

Speaking to a large audience of friends and supporters, Westfield Football Head Coach Matt Meekins said, “These young men had a great support system along the way. We are a team at Westfield High School, which means together everyone achieves more,” he said. Recognizing their hard work and sacrifice, Meekins also emphasized that a student athlete’s grades are the number-one determining factor in whether they receive scholarship offers.

Westfield’s Cedric Claiborne, who will join the University of Texas at San Antonio football team this fall, also acknowledged that winning scholarships takes more than athletic ability. “There’s more to it than football,” Claiborne said, “You’ve got to have the grades and be a great person, a great teammate, and a respectful person to teachers and everybody.” 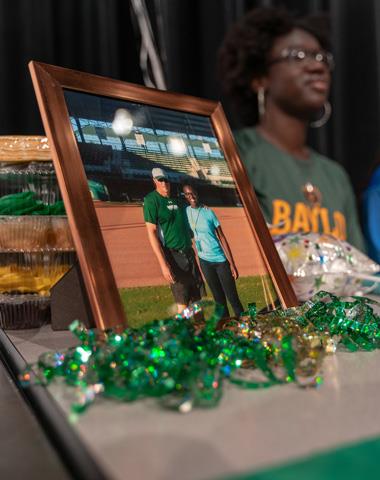 Yoni Moore displays a picture of her future coach at Baylor University.

At Spring High School, Athletic Coordinator and Football Head Coach Trent Miller spoke briefly before asking the 13 student athletes to introduce themselves to a packed auditorium. “I have a pretty good idea of what’s ahead for them in the future, both academically and athletically,” said Miller. “It doesn’t just happen by chance, and it doesn’t happen overnight. There’s countless hours of hard word, dedication and commitment to themselves and to their teams that have helped them get to where they are today.”

Spring’s Marques Pearson, who will play football at Kilgore College, gave thanks to his coaching staff and support system: “I would like to thank God, my friends and family, teammates and everybody who helped me through this process, pushed me to continue to keep my head on my shoulders, and to keep faith in everything,” Pearson told the crowd. 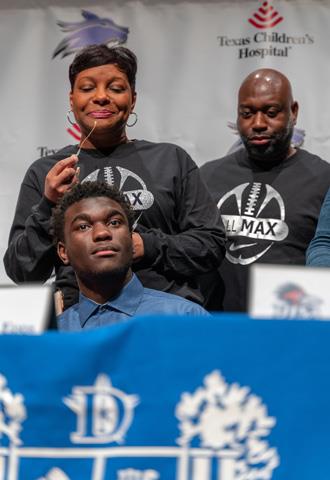 Maxwell Epps parents express their gratitude to the Dekaney High School staff as their son prepares for his future at Texas A&M - Commerce.

“Today is a day we always look forward to,” said Dekaney Football Head Coach Anthony Williams. “We’re a family. I’ve watched how these kids look out for each other, and when you see dreams come to light as a coach, that’s a great feeling.”

Dekaney’s Marcus Banks, who will attend the University of Alabama on a football scholarship after graduation, said that he would not be where he is today without the support of his coaches, family and supporters. “God works things out and pushes you through tough obstacles, and I just thank Him for all that he’s put me through. That made me who I am today.”

Dekaney High School senior Terrell Ratcliff, who will attend Bethel College in Kansas, spoke about the hardships he faced after moving from Colorado to Texas less than two years ago. His aunt, Angela Robinson-Bush, thanked everyone for their constant support and love. “He’s been exceptional ever since he stepped foot on the field,” said Robinson-Bush. “I’m definitely excited and grateful that he has the opportunity to continue to do what he loves. He’s always lived football, so to see him excel into a new chapter, I’m so excited for that.”