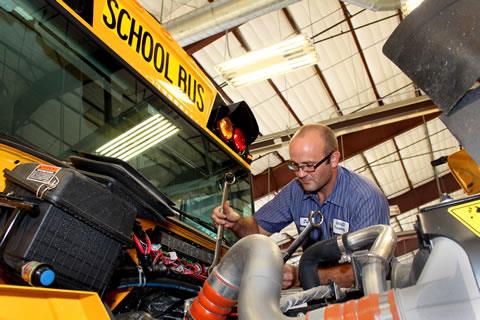 HOUSTON - Aug. 15, 2017 - The August issue of “School Transportation News” features 10 “Garage Stars” from across the nation, and Spring ISD’s own Jesse Bankston is front and center. As one of the district’s transportation shop supervisors, Bankston earned the recognition by demonstrating passion and dedication to student safety.

“Jesse has been a star in my opinion for a long time -- keeping our aging fleet of buses in tip-top running condition -- and we are proud that his attention to detail and quality work is being recognized at the national level,” said Keith Kaup, transportation director.

Using 2016 bond money, the district recently purchased 60 new buses that will be rolling out this school year, but with the cost of new buses averaging $90,000 to $100,000 each, Kaup said it is necessary to keep buses in operation as long as possible. That is where Bankston and his team shine.

He served in the Army as a heavy vehicle mechanic where he learned the importance of high quality workmanship. In fact, Bankston told School Transportation News that when working on school buses quality control is 100 percent.

After leaving the Army, Bankston worked in the private sector before coming to Spring ISD in 2007 as a bus mechanic. He was promoted to shop supervisor in 2015 where he leads a team of seven technicians who maintain the district’s fleet and are ready on a moment’s notice to respond when one of the district’s drivers needs assistance.

Bankston has an Associate Degree in Automotive and Diesel Technology from the Universal Technical Institute, and is ASE Automotive Master Certified. In addition, Bankston continues to serve his country in the U.S. Army Reserves.