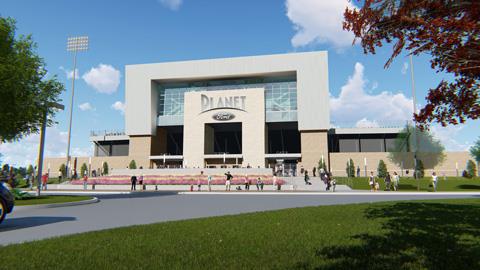 The naming rights agreement, worth $750,000 over the length of the 10-year contract, also gives Planet Ford exclusive naming rights to the stadium’s community center, which will be called the Randall Reed Center.

“Planet Ford, one of the most successful automotive dealerships in the state, has always been a big supporter of Spring ISD, and I couldn’t be happier that our new stadium will be named after this great organization,” said Spring ISD Superintendent Rodney E. Watson. “Randall Reed and his family understand the importance of strong communities and giving back. Now, when fans and families visit our new stadium and community center, they will be reminded of the contributions of Randall Reed and Planet Ford to our community.”

In anticipation of the signing ceremony, the board president noted the sponsorship agreement is a win-win for the district and Planet Ford, which will pay $75,000 annually for the naming rights. “Planet Ford Stadium will be a beautiful, modern facility that brings our community together for games, concerts and other events,” said Newhouse. “We are excited that the names of Planet Ford and Randall Reed will be part of this experience.”

Mr. Reed said the decision to partner with Spring ISD on the new stadium and community center made sense, especially considering the organization’s long history in the Spring area. The Planet Ford dealership is located only six miles away from where the stadium is being built on a 117-acre parcel of land at 23802 Cypresswood Drive.

“Giving back to the community is a large part of what Reed Family Enterprises is all about. We are pleased to actively support a wide variety of local charities, and we’re definitely proud to support Spring Independent School District,” said Mr. Reed. “Since 1996, the Reed family has been privileged to support various school booster clubs and district events. We have also leveraged Spring ISD’s athletic digital signage to market Planet Ford in the past. As such, we are now honored and excited to expand our support of the district through this naming rights agreement.”

Construction on the new stadium, designed by Stantec and built by Durotech, is nearing completion, with plans to open this fall. The facility will feature a low-glare turf field with seating for 8,000 fans, a state-of-the-art video scoreboard system, great views from every seat, family-friendly concessions and modern press box amenities.

Two special features of the project include the Randall Reed Center, a community room for up to 300 guests that will have options for catered meetings and events, and a memorial to honor the sacrifice of area service members.

Mr. Reed said the naming rights arrangement will be a way to promote Planet Ford while continuing to support Spring ISD. The automotive dealership is already a big fan of the district’s teachers, donating a new vehicle and an all-expenses-paid cruise to educators at the annual Spring ISD Employee Recognition Banquet.

“We are excited and look forward to continuing our involvement for many years to come,” he said.