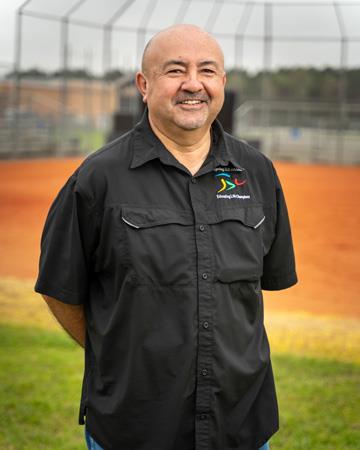 HOUSTON - Aug. 21, 2020 - Spring ISD Assistant Director of Athletics Armando Jacinto has been selected as the inaugural president of the Hispanic Texas High School Football Coaches Association. With more than 30 years as a coach, athletic coordinator and administrator in Waco, Austin and Houston-area schools, Jacinto was chosen by the recently formed group’s board of directors to serve a three-year term and help guide the organization as it establishes itself and grows.

“It’s not just about coaching football,” Jacinto said of the coaching profession. “It’s about serving people, and being well-versed in a lot of different job responsibilities, and that’s some of the things that we’re trying to help these coaches acquire knowledge in so they can be more marketable and ready for opportunities when they arise.”

With an aim to “facilitate the increasing need for highly qualified Hispanic educators and coaches in Texas,” the new professional organization will provide a hub for networking, mentorship and career development, while also offering clinics, workshops and other professional development opportunities for coaches across the state. The group was the brainchild of several high school coaches who started talking about the idea online two years ago, but COVID-19 shifted their plans into high gear earlier this spring.

“When the shutdown took place, people had more time at home,” said Jacinto, who got involved in March when one of his former students – now a coach himself – messaged asking if Jacinto would consider joining.

“People just started talking about it more and inviting other coaches to be a part of it, so the membership started to grow,” Jacinto said. “It was right around 200 members in April, then more people got involved, and now it’s up to over 600 members.”

Jacinto says the group’s mission includes developing members’ teaching and coaching skills, but also helping them develop as leaders and giving them the tools needed to advance in their careers. As assistant athletic director in a district with a coaching staff of more than 200, Jacinto has long considered mentoring others to be part of his mission, a fact that Spring ISD Director of Athletics Willie Amendola said makes him a perfect fit to lead the new Hispanic coaches association.

“Coach Jacinto has a clear vision of what athletics can be in a young person's life and the ability to realize the vision,” Amendola said. “He is also on a mission to uplift our coaches. Examples of this include our Coaches Learning Series, our Coaches Leadership Institute and the mentoring program for young coaches. Coach Jacinto is a born leader with the conviction to constantly improve himself and elevate the people around him.”

While the new Hispanic coaches association promotes the fellowship of all coaches, regardless of their background, Jacinto said that fostering diversity among Texas coaching staff was an important step in supporting the state’s increasingly diverse students.

“When I was going through the school system, my teachers would tell me, ‘If you really put your mind to it and you work hard, and you really have a goal, you can achieve that goal,’” Jacinto said. “And I believed them, because they were doing everything they could to help me be successful, but then I never saw anybody that looked like me that was in a leadership position.”

Having examples to look up to, Jacinto said, can be an important factor in the success of students. Seeing positive examples of diversity represented in leadership positions – both on and off the field – might be the spark that encourages students to dream big and pursue their own goals in life, he explained.